Tornadoes are some of the most dangerous and destructive storms on Earth. They develop almost without warning, leaving little time to react.

Unlike other natural disasters that typically occur in a specific geographic region, tornadoes have been documented in every state. In advance of a storm, taking precautions, such as developing an emergency plan, can help you stay safe if a tornado occurs in your area. Here is some general information to begin preparing and protecting your business, assets, and people.

Also known as twisters or cyclones, tornadoes are violent, rotating columns of air that extend from the base of a thunderstorm to the earth’s surface. According to NOAA: 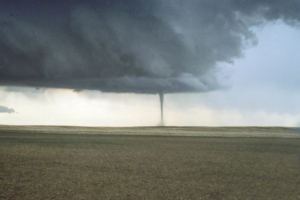 Tornadoes have been observed on every continent except for Antarctica, with the majority – about 1200 annually – occurring in the United States, especially in a region commonly called “Tornado Alley.” First used in 1952, the term was used as the title of a study on severe weather in parts of Oklahoma and Texas by USAF meteorologists Ernest Fawbush and Robert Miller. “Tornado Alley” is a term mostly used by the media to describe a region or area with a high frequency of tornadoes. The National Weather Service and NOAA have not given an official definition to the term nor have they specified a particular area as “Tornado Alley,” The U.S. tornado threat shifts from the Southeast in the cooler months toward the southern and central Plains in May and June, and the northern Plains in Midwest during early Summer. It is important to note tornadoes can occur and have been reported in all 50 states.

The peak tornado season for the southern Plains (ex. Texas, Oklahoma, Kansas) is May to early June. On the Gulf Coast, it is earlier in the Spring. In the northern Plains and upper Midwest (North and South Dakota, Nebraska, Iowa, Minnesota) peak season is June and July.

Before thunderstorms develop, winds change direction and increase in speed with altitude. This creates an invisible, horizontal spinning effect in the lower atmosphere.

Rising air within the thunderstorm updraft tilts the rotating air from horizontal to vertical. An area of rotation now extends through much of the storm. Most tornadoes form within this area of strong rotation.

Air Pressure:  Also known as barometric pressure, this is the weight of a column of air that extends from the surface (ground or water) to the top of the atmosphere. A tornado has very low air pressure.

Funnel Cloud:  A rotating column of wind that has not touched the ground. Funnel clouds are called tornadoes when they reach the ground.

Gustnado:  A whirl of dust or debris at or near the ground with no condensation funnel which forms along the gust front of a storm.

Jet Stream:  A powerful but narrow stream of wind that is in the upper troposphere.

Landspout:  The term for a weak tornado that looks like a waterspout.

Multi-Vortex Tornado:  A tornado that has two or more sub-vortices that circle the center of a larger tornado.

Supercell:  A dangerous type of thunderstorm that has a rotating updraft. These types of thunderstorms can last for hours and produce large hail, flooding, lighting, strong winds and tornadoes.

Tornado:  A violent, funnel-shaped rotating column of air that has contact with the earth’s surface and is extended from a thunderstorm base.

Tornado Warning: A tornado warning is issued when an actual tornado funnel has been sighted or detected by weather radar.

Tornado Watch: A tornado watch is issued when the weather conditions in a specific area or region are favorable for the development of a tornado.

Waterspout:  A tornado that occurs over a body of water. 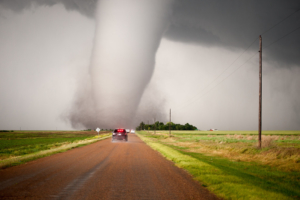 Our security consultants have decades of experience advising regional and global clients across numerous industries including automotive, construction, energy, financial, real estate and more. GMR 410’s services help create a safe environment with thorough threat assessments, policy and procedure review and development, and security audits. Unfortunately – and often without warning – a crisis occurs. Such events may include natural or man made disasters or criminal activities. Tap into GMR 410’s experience to ensure that you and your teams are prepared to respond to any crisis management or emergency.